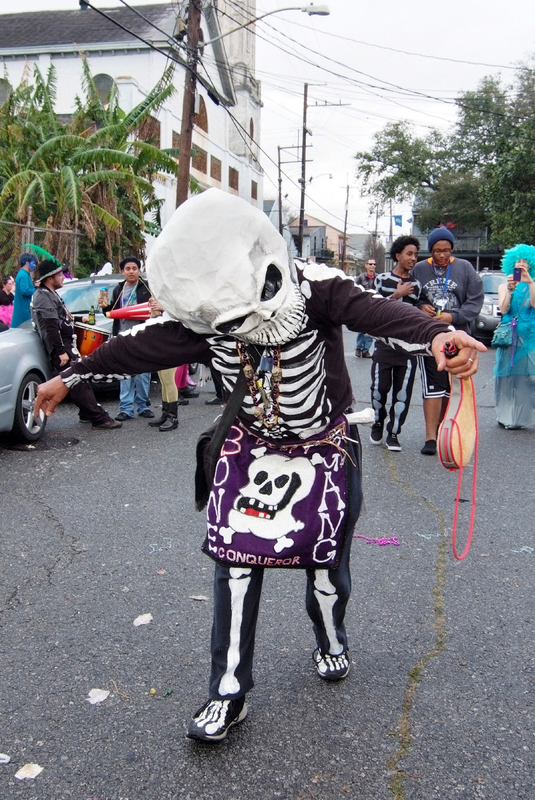 Voodoo (also spelled Vodou) derives from the term for deities used by the Fon people of West Africa and is a religion that believes all things have spirits. In this religion, humans in the physical world and invisible spirits called orishas (or lwa in Haiti) guide human and natural lives. The Voodoo faithful tend to the spirits with worship and devotion. In their modern form, these practices include communing directly with spirits through dance, trance, and rites to address a variety of personal and communal needs. As a religious system, Voodoo keeps people in harmony with their spirit ancestors and nature.

The enslaved in New Orleans were not able to practice their religion openly. Instead, they co-opted Catholic holy days and saints’ feast days, disguising the service of their own gods, who included Monsieur Dani (known in Haiti as Damballah) and Papa Lébat. While practiced in New Orleans in the nineteenth century among both African Americans and whites, over time Voodoo became a more hidden religion under the disapproving gaze of Protestant churches and law enforcement in the twentieth century. Today, however, the Voodoo faithful have become more open about their religion, leading to its continued influence in cultural life.

Because Voodoo developed as a spiritual system among those least powerful in Louisiana, its origins are not well documented. While some scholars trace it back to traditional religions among the Ewe, Fon, Yoruba, and Kongo peoples in Africa and see evidence of it in Louisiana in the late 1700s, others caution against ascribing a direct connection. While the full history of Louisiana Voodoo awaits further research, we do know that its practice has had significant influence in spiritual life in New Orleans, where Voodoo was regionally distinct until the 1940s, but is now heavily influenced by the Vodou of Haiti, where it remains a prominent religion.

Voodoo beliefs and rituals are intertwined with Mardi Gras masking traditions. Since at least the 1800s, skeleton, or skull and bone, gangs have been a part of Black carnival. Often dressed in black costumes painted with white skeleton bones, the maskers act as both carnival town criers and spiritual guardians. Rousing their community before dawn on Mardi Gras, their signature warning is “You next!” During such treks, Bruce “Sunpie” Barnes, Big Chief of the Northside Skull and Bone Gang, recognizes Papa Ogun, the god of iron and warfare, and the Haitian Vodou spirit family of Guédé, guardians of the cemetery.

Queen Kalindah Laveaux, a Voodoo priestess, brings spirit medicine to Black masking activities. Her society, the Mystic Seven Sisters, continues the traditional healing work of generations of women. They sometimes accompany the Northside Skull and Bone Gang to the Tomb of the Unknown Slave at St. Augustine Catholic Church in the Tremé neighborhood as the gang summons and embodies the ancestors. Traversing the streets, the women provide prayers and energy for a safe day.

The best-known historical practitioner of New Orleans Voodoo is the legendary Marie Laveau (1801–1881), who was a devout Catholic, a devotee of African spirituality and Voodoo, and a community leader. Both Big Chief Alfred Doucette of the Flaming Arrows and Cardell Patterson, Flag Boy of the Uptown Warriors, have made suits in honor of this esteemed figure. While some maskers honor the Voodoo past, others infuse carnival with contemporary Voodoo spirituality. The Divine Prince Ty Emmecca leads the House of the Divine Prince, a Voodoo spiritual church. He seeks to bring lasting healing to his tribe and community on Mardi Gras as Big Chief of the Black Hawk Voodoo gang. He makes patches for his suit that resemble Haitian Vodou drapo, ceremonial handsewn sequin flags. 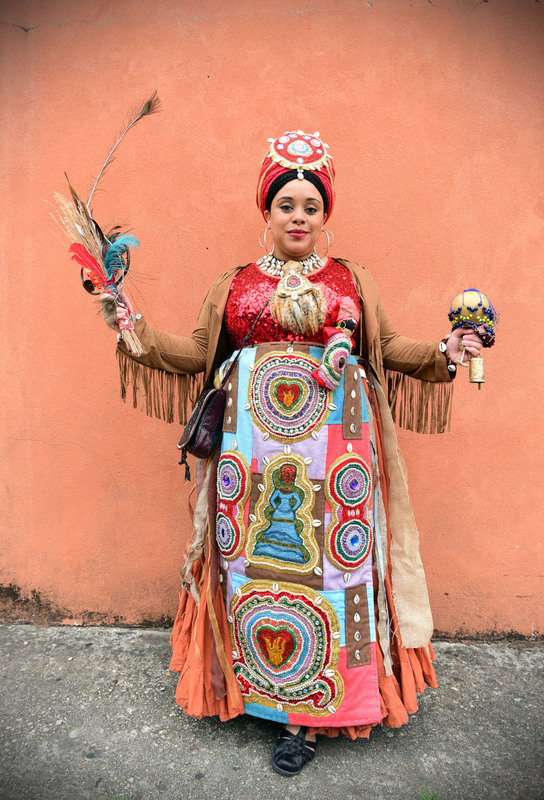 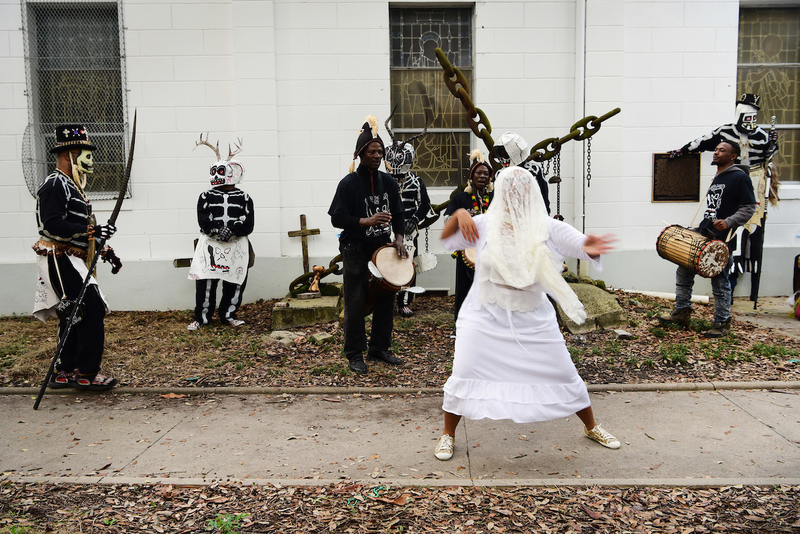 At dawn, the Mystic Seven Sisters have caucused with the Northside Skull and Bone Gang at the Tomb of the Unknown Slave, located in the heart of historic Tremé, one of the oldest Black neighborhoods in the country. The tomb stands on sanctified grounds, representing the enslaved people who worshiped at the church and danced in nearby Congo Square. The shrine’s plaque acknowledges “all slaves buried throughout the United States and those slaves in particular who lie beneath the ground of Tremé in unmarked, unknown graves. 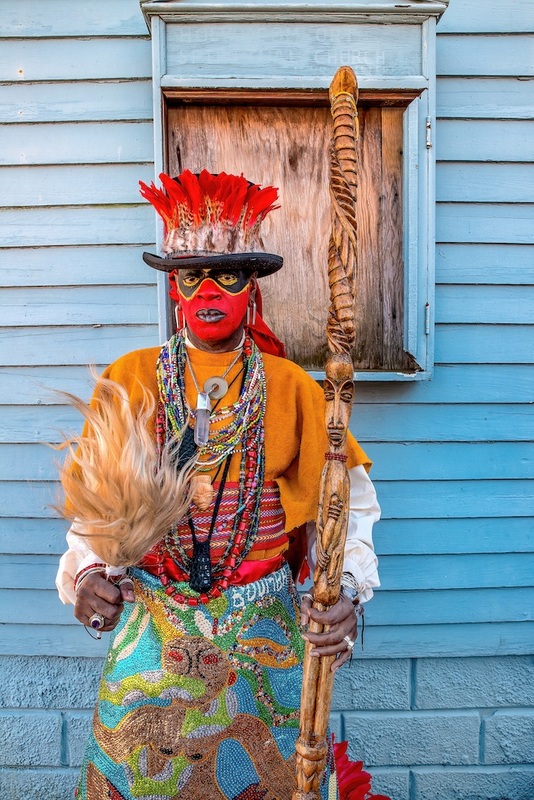 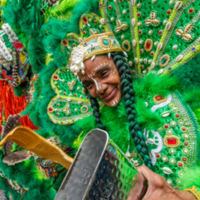 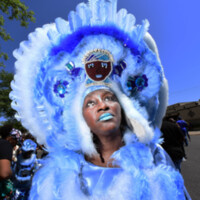 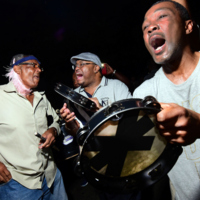 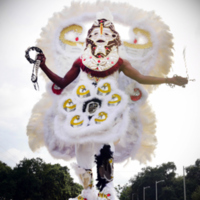 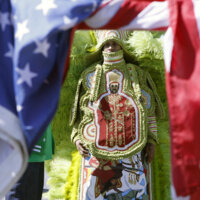 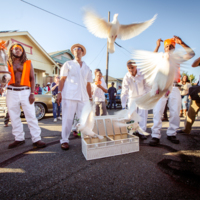 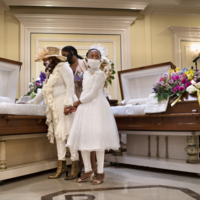